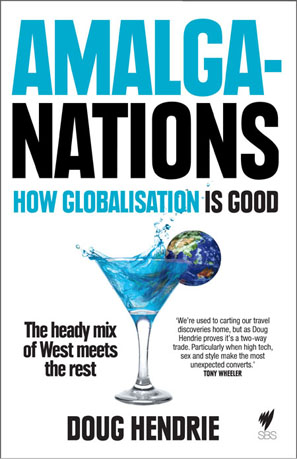 September? How is the year disappearing so fast? I’ve been a tad snowed under with New Dad Responsibilities, book excitement and impending PhD deadline.

AmalgaNations has been out almost eight months now. It’s been an interesting ride – from early media tarting to a long terrifying silence (was anyone reading it? was it shit? O gods) to a trickle of nice feedback. I sent a copy of the book to travel writer god Pico Iyer, and he wrote a very kind response.

The most interesting and unexpected thing that’s emerged out of AmalgaNations is that writing a nonfiction book has given me a platform to wax lyrical on topics I’m mostly unqualified about. It’s been excellent.

Anyway, in the interests of cataloging AmalgaNations meeja, here’s a short list:

I popped up on Radio Australia, ABC 702 Sydney and ABC 612 Brisbane and local stations from Newcastle to Mackay to Darwin to Hobart.

On Sunday Night Safran, I managed to bemuse Father Bob. Here’s the podcast.

Fairfax – The Age / SMH / Canberra Times
Review by Steven Carroll
NON-FICTION PICK OF THE WEEK
AMALGANATIONS. By Doug Hendrie. Hardie Grant. $29.95.
Think of a tank with a machine gun directed by a Sony PlayStation controller – it actually happened in the Libyan civil war – and you’ve some sense of the unpredictable way in which cultures, in a globalised world, can intersect. Prompted by a coffee in Footscray, which led to an introduction to African-Australian hip-hop, Doug Hendrie travelled much of the world curious to discover the effects of globalisation. Is it just another form of colonisation, transforming the world into one great homogenised culture, or is something else going on? Culture, Hendrie argues, “has never been static” and preserving cultural purity is impossible. Hybridity, he argues, is the norm and he presents four case studies, from the Philippines to Ghana, that exemplify the amalgams that result when Western culture meets another.

Melbourne University Voice had a write-up.

I spoke at Melbourne and Brisbane Writers Festivals – terrifying but rather fun to be on panels with the likes of Prof. Ross Garnaut and Linda Jaivin.

EVENTS:
I did a dinner event with the excellent Tony Wheeler at Eltham Bookshop, and also a Wheeler Centre panel discussion with Tony, Laura Jean McKay and Marni Cordell. Here’s the video.

I’ve also spoken at Melbourne University and Croydon Library. Cross-cultural wunderkind Tasneem Chopra invited me to address the Muslim Leadership Program at La Trobe University’s Centre for Dialogue, which proved to be an interesting discussion that served to educate me more than the participants.