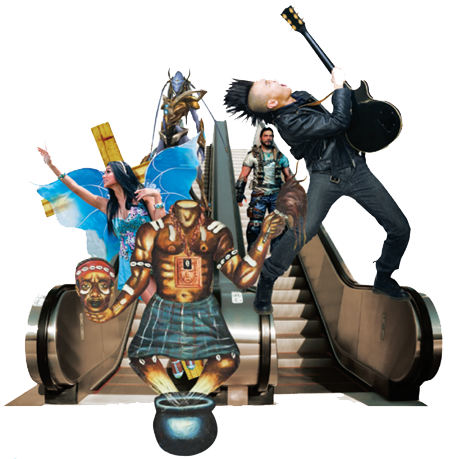 The spread of Western culture hasn’t led to a homogenised global culture, but rather a hybridised world of Azerbaijan rappers and Nollywood melodramas, writes Doug Hendrie (via the ABC).

Is Western culture bad for the world? Common sense might say yes. After all, since the Cold War ended, Western (largely American) culture has flooded the world in unprecedented quantities.

You can catch Hollywood’s output in a Manila cinema, listen to Kanye West in a bar in a Nairobi slum, play Grand Theft Auto in Dubai, and buy jeans absolutely everywhere. And that, you might think, is bad for everyone else.

Pope Francis has described the globalisation of culture as “a way of enslaving people“, while liberal political scientist Benjamin Barber famously dubbed it “McWorld“. What chance do smaller cultures have of preserving traditions in the face of Hollywood and pop music?

But hold up. It’s not as simple as Western culture trumping local. I’ve spent years examining the other side of the equation. What, I wondered, does the rest of the world actually do with Western culture when it arrives?

The answer, it turns out, is to figure out if it’s of any use – and then promptly tweak it and put it to work. But that’s only how it works for successful bits of culture. A surprisingly large proportion of the West’s output simply does not translate. There’s either no appeal, decent local alternatives, or an outright dislike of Western culture. Google can’t crack the Chinese market; McDonald’s is doing a little better, but it is having difficulty selling its trademark hamburgers and fries in a country more accustomed to chicken, pork and rice. Nollywood is trumping Hollywood across much of black Africa.

It turns out Western culture is a much tougher sell than commonly believed. The Hollywood films that do the best internationally are those that are least culturally specific – the least Western. Action blockbusters like Iron Man can be enjoyed without speaking English or understanding American references. Comedies and dramas are a harder sell.

What does Western culture have that isn’t available locally? Often, it’s a sense of a wildly different lifestyle, rinsed in wealth and excess. Western culture appeals because it’s exotic – it’s something to aspire to. But it does not always speak to the way people live in the other six-sevenths of the world. A maker of culture has zero control over whether their product will find room in another culture already full of local alternatives. There’s a certain hubris in the belief that American/Western culture will, by default, supersede another longstanding culture, when people are free to choose.

US economist Tyler Cowen put it simply in an interview with Reason:

A lot of these so-called attempts at cultural imperialism are failures, and a lot of companies have lost a lot of money when customers don’t want the product.

So if Western culture doesn’t necessarily trump local, what is it that sticks? What I found in each of the four countries I visited – South Korea, Indonesia, the Philippines and Ghana – was that globalisation led not necessarily to a homogenised world, but often to a hybridised one.

A crop of startling new subcultures were emerging – the professional video gamers of Korea, who turned an old American game, StarCraft, into a televised sport, complete with celebrity, big bucks and fangirls; a local tradition of gay tolerance in the Philippines somehow synthesising with the country’s very Catholic sensibilities; hardcore punk taken up with relish by anarchists and Muslim evangelists alike across all of Indonesia; and savvy street filmmakers in Ghana using cheap handycams to make ultra-local stories to fend off an external threat. Hollywood? No, Nollywood – the slick-and-sexy Nigerian film industry.

There were many more West-meets-rest cultures I could have explored – familiar and distinct, all at the same time. They run the gamut from Ukraine’s internet scammer villages to Russia’s malware writers turning American technology back on itself, from the surprising popularity of surf rock in Cambodia to the Balinese ‘cowboys’ offering the boyfriend experience to female tourists, from the nationalistic rap of Azerbaijan to the enormous popularity of local hip-hop artists across black Africa, many of whom claim to be more authentic than African-American gangsta rap.

And consider Psy: a pop artist famous in South Korea, can, through YouTube, have one catchy song listened to a billion times, across the entire internet-enabled world – the first time K-pop broke out of its avid North Asian fanbase and took the West.

Culture is flowing in more directions now. And new audiences are appearing for novel cultures – for Jamaica’s ragga and reggae and dancehall, for Mongolian throat-singing, for Nollywood melodramas and Iranian dramas, for Korean soaps, for Japan’s cute mascots, for Latin American soccer matches, and for the French urban running phenomenon of parkour.

Western culture is hardly the imperialist force it’s made out to be. In reality, host societies modify newcomers – whether people, floating culture, technologies or ideas – and are themselves altered in turn. Culture never skips a border unchanged. Even something as culturally ‘authentic’ as Australian Aboriginal dot-painting is an amalgam of age-old Indigenous techniques fused with Western technology: canvas and paints.

The same processes of selection and mutation apply to both live culture and technologies. The al-Ansar Brigade fighting in Libya’s civil war deployed a homemade tank, the Sham II, using a Sony PlayStation controller to aim the external machine gun. Much of Kenya’s economy now runs by text message, with a successful adaptation – M-Pesa, a mobile phone banking system – achieving uptake undreamt of in the tech-savvy Western and Asian nations who perfected the original technology.

These radical shifts are at once terrifying and exciting. The old givens change – or flounder. But this is how new culture has always developed. No one is in control. It is bottom-up, generated by the preferences and interests of you and I. It is impossible to predict which pieces of culture are sticky – which will lodge in our collective subconscious – and which will blow through with the wind.

In Seoul, Manila, Accra and Jakarta, I caught a glimpse of a possible future that I liked, where hard-edged cultural differences erode in favour of cross-border commonalities and mutual reinvention. A future where tradition and modernity mingle and neither emerges untouched. Where people speak many languages and draw on many influences to make meaning of their lives – from the world, from the region, from the nation, from the local.

They are creating amalgamated nations – transnational and local all at once. Their strategies vary widely. But the end result is the same: a small new subculture emerges, a hybrid, a successful mutation with local and global parentage.

My book in brief: When Western meets local, neither stays the same

Published: December 11, 2016 Author: Doug
Previous: The new challenge for climate action? Populism
Next: Persistent, resilient: why company hires refugees and the competitive advantage they give it