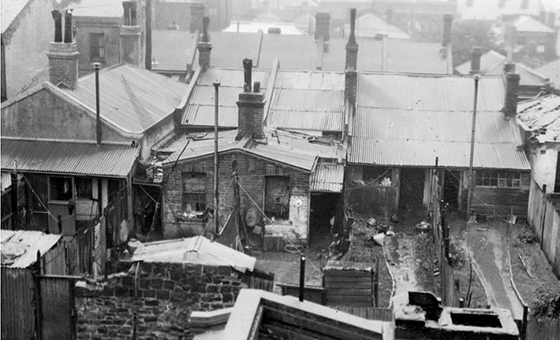 When I first started riding between two of the housing commission flats in Lygon St, Carlton, back in 2010, I wondered where the residents were. The four immense towers – some of the largest ever built by Victoria’s Housing Commission – are home to more than 3000 people. So where were they?

Two years later, I had my answer. As a long-awaited renovation of the flats gathered speed, men in orange vests turned bare earth into grass and shiny new playground equipment. And then, suddenly, children. By their dozens they came, squealing, shucked from their flats, and with them, their mothers and fathers. A barbeque area sprouted. Next up is a community garden and, government willing, a proper park built on council land. And all the while, the orange vests treated the concrete cancer spreading on the exterior walls of the 50 year old flats, while colleagues renovated the interiors of aging flats in the largest housing redevelopment in the state’s history. Close by is a large new set of private apartments built on what was state land, pitched as a way to fund the redevelopment and reduce social isolation. To the north lies College Square, evidence of Victoria’s mini-boom in mining the rich veins of international students. But what I was taken by was the people.

“I remember the change well,” says Hamdi Ali, the secretary of the Carlton housing estate residents association. “It was last summer, and it was warm and school holidays. There were children playing on the new playground till 10pm at night. There were complaints, sure, but it’s good! The children love it and you see the mothers coming down. And people are socialising more – there are weddings here, coffee, meetings. That’s what happens now.” He giggles, a surprisingly young sound. Ali works three days a week with the computer exchange at the base of 510 Lygon St and donates the rest of his time to the association. Hamdi – black jacket, brown shirt, a gleaming grin – has been in Melbourne 18 years, first in public housing in South Melbourne, and then renting with friends in Heidelberg West, another Somali settlement. He’s 38, though it takes him a while to remember (“We don’t celebrate birthdays so you don’t get the yearly reminder”).

Hamdi was one of the first to find refuge in Australia from the drought and war of the Horn of Africa in the 1990s, leaving war-torn Ogaden, a restive Somali enclave in Ethiopia, for Somali camps in Kenya before settling in Melbourne. When he was finally able to bring his wife and three children across, he thought the Carlton estate would be ideal. The flats had become a safe haven for migrants from the Horn of Africa – a place to learn the ropes of a very different society. Somalis are now the main group in the Carlton flats, alongside Ethiopians, Eritreans, and older people from previous migration waves: Vietnamese, Turkish, Greek. And that makes Ali’s role the Chief Explainer, the go between who teaches new arrivals the ways of this foreign place – how to get a car license, what to learn to pass the citizenship test (“I knew someone who failed eight times”), where to buy a second-hand computer and what time the sewing group meets. He’s between worlds, negotiating with representatives from the Office of Housing, the Melbourne City Council, the State Government. The redevelopment push will move next to the large flats in Richmond, Prahran and Fitzroy. But the economic backdrop is less certain. There are lengthy waiting lists for public housing at a time of extreme housing unaffordability.

In March, Victoria’s Auditor-General released a damning report on cost blowouts in public housing. Part-privatisation is one option being floated. Hamdi tells me he likes the new private apartments springing up nearby, that he thinks increased mixing is crucial for the newly arrived. “The best way to adapt to Australia is to interact with an Australian, to know how things are done here,” he says.

In the late 1930s, poverty was common in Australia. In the Victorian countryside, the poor still used Depression-era techniques to feed themselves – bandicooting potatoes, taking the tuber while leaving the plant intact. The cities were worse. Melbourne was riddled with hidden slums, with disease and misery tucked away down bluestone laneways. In 1938, Premier Albert Dunstan declared a war on slums. The newly formed Housing Commission began building public housing everywhere it could, reclaiming slums and building new estates on the urban fringe. By the early 1960s, the Commission had shifted focus to the inner city and commenced work on the first of its 45 famous bleak concrete high-rises across Melbourne’s inner city.

Residents in workers cottages across the entire suburban block where the Carlton Estate now stands had their land compulsorily acquired. Before long, more than a quarter of Collingwood and Flemington were public housing, with Fitzroy and the inner north-west not far behind. By the mid 1970s, a rising community backlash stopped the Commission from repossessing more of Carlton and other inner city areas. Resident groups fought to keep their working class cottages from the wrecking ball, a prescient move in the years before inner-city gentrification began enriching owners in earnest. Elsewhere, there was rising unease about the idea of keeping the working poor walled away from the rest of society.

By the 1990s, the flaws in the high-rise flats had become evident. The 20 inner-city high rise sites stood out in a sea of gentrified creatives and white collar workers. When heroin dropped drastically in price, the commission flats became ground zero for the junkie wave. To the middle-class eye, the flats were not working class – they were underclass. But then the heroin wave receded, leaving a few strongholds – Collingwood, Fitzroy, Richmond. Elsewhere, the high rises were morphing into migrant havens. Flemington, Footscray and Carlton are amongst the most migrant friendly. “The Horn of Africa communities have their own issues. But they don’t have drug issues,” says Hamdi, grinning broadly. “There’s a perception out there that this place has very low socio-economics. But this is a good place to live for people new to this country. We don’t need permanent security guards like other commission flats.”

Hamdi introduces me to Mustafa, a Turkish resident of 17 years. Mustafa takes me up to level eight. The mirrors in the lift have been scratched by knives, the ceiling carpeted in the black blossoms of cigarette lighter burns, but the floor is freshly mopped. Mustafa harrumphs. “I cleaned the lift myself,” he says. The doors open to a million dollar view of the CBD. “Here is my flat,” he says, and shows past his yappy white dog to his aging kitchen. “I need a new oven,” he says. Hamdi leans across. “Mustafa owned restaurants across the inner north. He’s a chef,” he says. The flat is well-kept, but has not aged well. The carpet moulders underfoot, and the walls are dingy. As Mustafa shows me out, I nearly trip over an upturned BMX once belonging to a son of his. He grins. “Three sons. A designer, a primary school teacher and an accountant,” he says proudly. “Education – that is key.”

Hamdi takes me back downstairs, into the chill air. I spot a noticeboard in his office, papered with events and opportunities. The Australian-Somali Football Association invites spectators. The international-student run Meld Magazine has launched a Carlton Community Cookbook. There’s a new Men’s Shed. I ask him what people do as a job when they first arrive. He smiles. “Men drive taxis,” he says. “I did for many years, before studying to be a network engineer. But women – women have just started running family day care businesses in their flats. There are now 10 to 15 businesses in these flats alone. My son goes to one.” He flashes brilliant teeth and disappears back into his office.